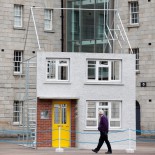 Take an adventure into the “arc-of-disadvantage”

Are you bored by the costumed buffoonery of the annual suburban “Bloomsday” celebrations? Why not instead embrace the true theatricality of Joycean urbanism and play the REDRAWING DUBLIN ‘Reality Urbanism’ walking bord game.

REDRAWING DUBLIN invites you to take a leisurely one hour stroll through Dublin’s City centre and Inner City to discover ‘Reality Urbanism’ in Dublin today. (Allow an additional hour for lunch, stopping points, photos and discussion).

“Our journey will take you from the heart of buzzing Exchequer Street in Dublin’s City Centre through the ‘Arc-of-Disadvantage’ of Dublin’s Inner City, to the Phoenix Park and back along the ‘Dublin’s North West Bank’, fittingly ending in Mick Wallace’s “Quartier Bloom”. Along the way our urban story will unfold before you, capturing both the best and worse Dublin’s fledgling urbanism has to offer”.

“Does Dublin have a personality?” The renowned psychiatrist DR Ivor Browne will give a talk at 11am in Fallon@Byrne on June 16th titled “Blooming Attitude – Does Dublin have a personality? This is based on his analysis of 150 blog contributions posted during the Irish Architecture Foundation and REDRAWING DUBLIN 10 week on-line-poll which discussed urban issues confronting Dublin. The “Blooming Attitude” Walking Tour invites “Dubliners” to take a leisurely one hour stroll through Dublin’s City centre and Inner City to discover ‘Reality Urbanism’ in Dublin. (Tour guides include City Architect Ali Grehan and City Planner Dick Gleeson amongst others)

At its most simple, “Blooming Attitude” is about reclaiming Ulysses Urban Dublin, reinventing the now somewhat jaded theatricality of the suburban annual June 16th “Bloomsday” celebrations to deconstruct the contemporary mind and map of 21st century urban Dublin.

Dr. Ivor Browne will present ‘Does Dublin have a personality?’.

METROWALK will be a narrated tour of the city centre and the inner city, urban tour guides include City Architect Ali Grehan, City Planner Dick Gleeson amongst others…

Ivor Browne is an Irish psychiatrist, author, former Chief Psychiatrist of the Eastern Health Board, and Professor emeritus of psychiatry at University College Dublin. He is known for his opposition to traditional psychiatry, and his scepticism about psychiatric drugs.

This entry was posted on June 16, 2011 by Redrawing Project in Events, Redrawing Dublin.