The book was awarded the Arts Council  ‘Engagement with Architecture Scheme’ grant in 2010. 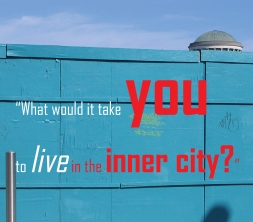 It draws possibilities, draws thinking and draws space. It is both a visual essay and an act of ‘action urbanism’.

REDRAWING DUBLIN captures a snapshot of Dublin today, reveals
glimpses of recent memory, and imagines alternative possible futures. It walks the streets of Dublin, explores neighbourhoods, and maps the city metropolitan region. It opens the door to existing buildings and buildings that never happened, investigates abandoned spaces and the people who inhabited them, aborted skylines and the language that tried to make them happen. The book is full of hidden facts, surprising statistics and

unspoken truths. It employs strong and original visual imagery, graphic design and photography to tell a story of a city that has undergone a considerable transformation in the last fifteen years.

A strong theme in the book is the inherent tensions between urban and
suburban Dublin. REDRAWING DUBLIN asks what type of city Dublin really is. Where does it begin and end? Is Dublin really a Georgian city or a city of two-storey housing? What is the difference between the city centre and the inner city? And why is it desirable to live in one but not the other?

citizens to confront Dublin’s urban contradictions, to see and tell it as it is, not as it is imagined or often believed to be. This is a story that asks
uncomfortable questions but offers hopeful solutions.

Through the use of insightful imagery, REDRAWING DUBLIN stretches the imagination to deconstruct and reconstruct a city. This is an inclusive and accessible language that seeks to initiate a dialogue on the future of this city at a challenging time in its history.